The Arban Method is a method that allows students to learn different instruments, such as:

It is often called the “Trumpeter’s Bible”, as it is still used today by talented musicians.

In BlackBinder, the Arban Method is the most popular one. The sheet music is available for free in the App in BlackBinder’s format, from the 18 blocks included in the Arban Conservatory Method for Trumpet: Abridged Edition, by Laverty, which contains the most commonly used exercises found in the larger Complete Conservatory Method, first published before 1859. This new edition is designed to be a more user-friendly version of the original work.

Who created the Arban Book?

The creator of Arban Method was Jean-Baptiste Arban, had the intention of making it a complete and pedagogical resource to study cornet. His first masterpiece, “La grande méthode complète de cornet à piston et de saxhorn par Arban”, published in 1879, contained theory and exercises for both cornet and trumpet.

The exercises of the Arban’s Complete Conservatory Method differed in difficulty, aiming to create a logical sequence that students could go through, in order to learn and make progress. The publication included the popular “Carnival of Venice”, based on a Neapolitan folk tune, with many variations introduced by the author.

Indeed, Jean-Baptiste Arban, during his life (28/02/1825 – 08/04/1889), made important contributions to the importance attributed to such instruments, showing it is possible to make cornet, and other instruments, solo instruments, that can be mastered using the right techniques and by following a proper sequence.

The Phases of the Arban Studies

The masterpiece written by Arban, not only covers exercises, but also explanations that are as important as the practices.

First Studies of the Arban Method for Beginners

Arban starts by focusing on tone (Studies 1-10), a necessary part of playing any instrument. Next (11-50), guides the readers with fingerings, develops the range and insists on the habit of being precise while attacking notes.

The first studies for the beginners end with exercises on the 6/8 meter. This chapter will help students to articulate effectively.

The simple slurs are covered in his method, which are done by variating the valves, and suggests pronoun “taw-ee” when playing.

He goes through advanced studies that combine slurred and staccato playing. In the end of the chapter, the student will acquire more flexibility, as well as control.

Scales in the Arban Method

The Arban Book includes studies on the major, minor, chromatic scales and numerous variations thereof. There are also fun scale patterns and short exercises to help gain control over the instrument. 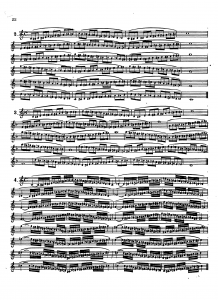 Jean-Baptiste Arban covers a diversity of ornaments to be played on a trumpet or cornet.
He then integrated them into various tunes. The chapter is crucial for learning how to get a “musical edge.”

This section was built for students who already acquired an advanced level of skill, and are ready to learn more about:

Different ways of tonguing are covered in this section, such as triple, double and fanfare tonguing. The author uses a variety of pronunciation combination.

The Art of Phrasing: 150 Classic and Popular Melodies

After the basics are taught, Arban integrates the teaching into songs, that include some of his popular etudes.

Now that Arban has taught the student his or her basics and instilled within him or her all the best of playing habits, he integrates these into performable songs. These include his popular etudes:

At BlackBinder we aim to contribute to the improved performance of all truly devoted brass musicians and so we have decided to publish the most relevant and useful Arban Methods.

Check these new scores available for free: download the latest release of the App and start practicing with BlackBinder these essential pieces and exercises. Now you can enjoy all the sheet music for this edition in the App for free, with Automatic Scroll, so you can focus on your performance, and don’t have to manage cumbersome PDFs nor turn any pages.

The Arban Method for other instruments

With BlackBinder you can enjoy the Arban Conservatory Method for Trumpet

With BlackBinder you can enjoy the Arban Conservatory Method for Horn.

With BlackBinder you can enjoy the Arban Conservatory Method for Tuba.

With BlackBinder you can enjoy the Arban Conservatory Method for Trombone.